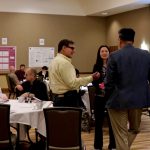 Illinois Sustainable Technology Center, Illinois-Indiana Sea Grant, and the Department of Civil and Environmental Engineering at the University of Illinois co-hosted the 2018 Emerging Contaminants in the Aquatic Environment Conference (ECACE18) which  was held on June 5-6 in Champaign, IL. The third annual conference highlighted research, education, and policies related to recently detected emerging contaminants and chemicals that are re-emerging as concerns.

This year’s conference focused on a variety of specific issues ranging from PFASs and microplastics to pharmaceuticals and personal care products (PPCPs), as well as many other types of emerging contaminants found in water and the environment.

PFASs, or per- and polyfluoroalkyl substances, are a group of man-made chemicals that are typically found in fire-fighting foams, water- and stain-resistant textiles, and non-stick cookware. They were described by one of the keynote speakers, Dr. Rainer Lohmann who is professor of oceanography at University of Rhode Island and director of a new Superfund Research Center on PFASs, as being “an even bigger environmental problem than PCBs”. PCBs or polychlorinated biphenyl compounds have been a major contaminant in soil, water, and air since the 1970s and are still being cleaned up from old industrial sites and other areas.  PFASs are as persistent as PCBs, bioaccumulate, and are even more soluble in water than PCBs. Dr. Lohmann went on to discuss how PFASs have been found hundreds of feet below the surface of the oceans and have moved through air and water to remote areas such as the Arctic.

The conference not only featured national speakers such as Dr. Lohmann and presenters from as far away as Florida and California, but also international speakers. They included:

Prairie Research Institute scientists from ISTC, the Illinois State Water Survey, and the Illinois State Geological Survey also presented their research results on microplastics and PPCPs detected in karst groundwater in Illinois. This widespread participation of researchers, educators, and policy makers from across the globe illustrates the ubiquitous nature of emerging contaminants in water throughout the world and emphasizes that it will take a collective effort by all of us to solve these pollution issues.

The videos of the 3 keynote presentations will be available on the ISTC website within the next two weeks.