LibGuides is a web 2.0 platform that librarians use to create topical guides to help their users find information. It combines the best features of social networks, wikis, and blogs into one package. Librarians can incorporate RSS feeds, video, web links, bibliographic citations, search boxes, and other finding aids.

LibGuides also allow librarians to create polls and allows users to comment on specific resources and tools within each guide. Users can also sign up to receive e-mail alerts when new content is published, either for particular topics/keywords or for a specific librarian. The guides created by ISTC’s Sustainability Information Curator are available here.

Some guides of particular interest include:

As regulations governing environmental water pollution are enacted, the demand for improved remediation technologies and related materials must be addressed. Some of the most problematic pollutants are the volatile organic contaminants (VOCs) because of their high mobility through soils and into aquifers, and their resistance to biodegradation. Some of the most ubiquitous of these chemicals include trichloroethylene (TCE), chloroform, and methyl tert-butyl ether (MTBE) due to their prolific use in the metals finishing, dry-cleaning, water treatment and reformulated gasoline industries.

In the present study, activated carbon fiber assemblies (ACFAs) were developed and tailored to adsorb these contaminants and improve upon the current industry standard of activated carbon granules (ACGs) while remaining cost competitive. These new materials have higher surface areas, faster adsorption rates due to improved contact efficiencies, and in situ regeneration capability through electrical resistance heating when compared with ACGs.

Advantage is taken of flexible fabrication techniques to tailor porosity and surface chemistry for the specific removal of TCE, chloroform and MTBE from water. The surface area, microporosity, and surface chemistry of ACFA coatings were monitored through the use of TGA, BET N2 adsorption, elemental analysis, and XPS equipment while aqueous VOC concentrations were analyzed using a purge & trap GC. Static and dynamic adsorption evaluations displayed a major improvement over ACGs and the contaminated ACFAs also demonstrated the ability to be regenerated under relatively mild conditions. 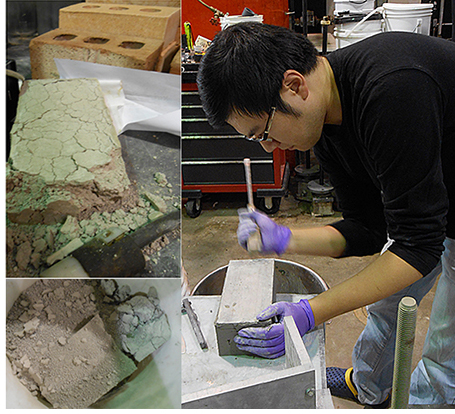 Ash produced from biofuel production by biomass gasification is suitable for use in bricks and concrete and lowers costs, according to a recent technical report published by ISTC.

Biomass converted to biofuels grew 500 percent in the U.S. between 2002 and 2013. Biomass gasification ash (BGA) from the conversion process costs $80 a ton to landfill and ash amounts will continue to increase when the U.S. Environmental Protection Agency stabilizes agricultural markets with strong Renewable Volume Obligations under the Renewable Fuel Standard. So it is beneficial to explore utilizing BGA for useful products instead of landfilling.

Coal ash has long been effectively used as a raw material in brick and concrete production. High unburned carbon in ash adds to the firing energy of bricks in a kiln. Coal ash also has high lime content which gives it self-cementing properties that can substitute for some cement in concrete production.

Researchers at ISTC, a unit of the Prairie Research Institute at the University of Illinois at Urbana-Champaign, and Eastern Illinois University (EIU) found BGA shares these traits, allowing cheaper manufacture of standardized quality masonry products using the waste BGA.

For brick making, 5-18 percent BGA replaced clay and shale. The best results were seen with ash replacement of 5-10 percent. In this range, bricks were lighter in color and weight, but still met ASTM standards for compression strength of several grades of bricks.

“This offers the potential for renewable biofuel production becoming a sustainable energy source if the byproducts can be beneficially utilized avoiding costly landfills,” said Patel, a manufacturing engineer at ISTC’s Oak Brook office.

As per an economic analysis considering materials and transportation, a cement company replacing 20 percent of the 6,675 tons of cement it uses annually with BGA would save nearly $155,000. The ash producer would save an additional $107,000 by avoiding landfill fees.

“That is in addition to energy savings of 1,906 MMBTUs and reduced CO2 emissions of 1,336 tons,” explained Toosi, a Professor at the School of Technology at EIU.

In a case study for a brick producer making 120 million bricks annually, 10 percent BGA use could cut production costs by $153,000. BGA suppliers could save $2.4 million by avoiding landfilling fees.

Experimental data also suggested that ash of small particles (0.150 mm and 0.075 mm) might increase concrete strength above 4,500 psi, even at 20 percent addition of BGA.

As population increases, the demand for clean, fresh water will also rise, making existing supplies a very precious resource in Illinois and other parts of the US. ISTC seeks to help businesses, industries, communities, and the general public with water conservation measures such as:

ISTC has set a goal of conserving one billion gallons of water in Illinois. It is funding projects and conducting its own research along with other scientists, industry and other experts that will be looking for:

To date, there have been three case studies published as a result of these efforts. They are:

The Prairie Research Institute has published An Updated Look at PCBs, a report stemming from the Sept. 17 scientific workshop on “PCBs and Their Impact in Illinois”.  The one-day workshop on the University of Illinois Chicago campus gathered leading authorities on the history and science about the persistent pollutant.

PCBs (polychlorinated biphenyls) are a class of synthetic chemicals widely used in industry as a coolant and electrical insulator. The report, videos of panel presentations, and other useful information are available for viewing on the PCB workshop website.

Applications for the Illinois Governor’s Sustainability Award will be accepted until 5:00 p.m. on Friday, May 31, 2013.  Please remember to submit your application by this date to be recognized for your environmental efforts.

Details and application information can be found on the Illinois Sustainable Technology Center website  http://www.istc.illinois.edu/info/govs_awards.cfm.

If you have any questions, please contact Deb Jacobson at djacobso@illinois.edu.

The University of Illinois at Urbana-Champaign invites applications and nominations for the position of Director of the Illinois Sustainable Technology Center. For over 25 years, the Illinois Sustainable Technology Center (ISTC) has been a leader at both the state and the national level in promoting industrial ecology, pollution prevention, natural resource conservation, and sustainability research, education and outreach. It was established by the Illinois General Assembly and is one of the five surveys comprising the Prairie Research Institute. By integrating environmental research, technical assistance, demonstrations, and communication, ISTC acts as a catalyst to improve economic vitality, encourage efficient use and conservation of resources, and achieve a healthier, sustainable future for the people of Illinois.

The Director will lead the Center in the execution of its mission and in maintaining and enhancing its tradition of excellence.

We seek candidates with national visibility, proven leadership and managerial skills and a commitment to promoting sustainability.

The Director position is a benefits eligible, academic professional position appointed on a 12-month service basis. Salary range is $155,000 to $165,000 annually. The expected start date is as soon as possible.

TO APPLY: This posting will remain open until filled. To apply, all candidates must submit an online profile through https://jobs.illinois.edu by the close of the posting period. Qualified candidates must upload a letter which details qualifications noted above, resume, and the names and contact information of three professional references. All requested information must be submitted for the application to be considered. Incomplete information will not be reviewed.

The University of Illinois is an Affirmative Action/Equal Opportunity Employer. The administration, faculty, and staff embrace diversity and are committed to attracting qualified candidates who also embrace and value diversity and inclusivity. www.inclusiveillinois.illinois.edu.

The report is the result of a project funded by ISTC’s Sponsored Research Program.

Join Susan Mazur-Stommen, Director of Behavior and Human Dimensions Program at the American Council for an Energy-Efficient Economy (ACEEE), to discuss what behavior change research tells us about how people make decisions and what motivates them to make changes. She will also examine how pollution prevention technical assistance providers can use that research to influence behavior change and improve implementation rates at the companies they work with.