The age-old American tradition of a backyard barbeque dates back to at least 1672 when John Lederer mentioned “barbecue” in his writings. Over the years there has been secret recipes and perfect techniques that brought about the classic question: Charcoal or Gas? While there are merits to both for taste, evenness of cooking, and cooking time, the bigger question we should be asking these days is: “Which one is more sustainable?”

Let’s get one caveat out of the way. What you are grilling has more of an impact on your sustainable grilling event than which grill you are using. Beef has two times or more of an environmental impact than chicken or vegetables. More reading on the true cost of food:

The charcoal vs. gas debate isn’t as clear cut as you might think. While it is fairly obvious that charcoal puts out more particulate matter when burning, it also gives off about two times more carbon dioxide emissions than propane gas. Initially then because of those points, I thought gas was more environmentally friendly, but let’s take a step back and look at the whole picture.

Propane gas comes from fossil fuels and is not renewable because it takes millions of years to form. Plus, you have the environmental impacts from the refinery processes and the transportation emissions to get the propane to your local store. On the other hand, charcoal is in a sense a renewable fuel because it is made from trees that can be, in theory, replanted. Charcoal could also be considered carbon neutral because as we burn the charcoal releasing CO2, other trees that replaced the harvested trees are taking up CO2. But this concept relies on more trees being planted than the number of trees harvested because young trees do not use as much CO2 as older trees. Also charcoal still has the same transportation emissions as propane gas to get the charcoal to the stores.

However, there is ash left over after a charcoal fire that needs to be landfilled whereas propane gas has no solid residuals. In addition, many people use lighter fluid to start charcoal but a more sustainable option is to use a chimney starter which requires little to no liquid fuel.

But there is more to the charcoal story. Typical molded briquettes contain additives and lighter fluid that cause air pollution, such as PAHs, when burned, but they also are made of wood waste like sawdust that would normally end up in the landfill. A possibly more sustainable charcoal is lump charcoal that can come from sustainable sourced timber but typically these options are not locally sourced and produced, so transportation emissions should be included in their carbon footprint. The best case scenario for charcoal would be to use locally sourced lump charcoal derived from wood scraps used in conjunction with a chimney starter.

All in all, if you are planning to grill, there is no right or wrong method because CO2 emissions from grills and barbeques account for only 0.0003% of the U.S. annual carbon footprint. In contrast, the major problems surrounding “grills,” otherwise known as cook fires, are in poor nations. A 2005 study by University of California-Berkeley and Harvard researchers found that pollutants from these cook fires cause 1.6 million deaths per year due to respiratory diseases. Paul Anderson, known as Dr. TLUD, has done work with many poor communities in developing countries to teach them the manufacturing technology and health benefits of top-lit up-draft (TLUD) cookstoves, which reduce emissions considerably when compared to traditional cook fires. 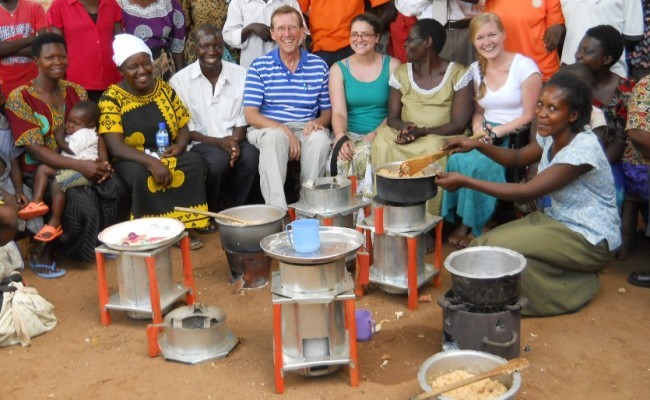